Beats record by three seconds on the streets of Boston

In her first professional road race, 24-year-old Weini Kelati blazed to victory and a new event record at the Boston 10K for Women, Presented by REI. The Flagstaff resident and Eritrean-born Kelati broke the tape in a time of 31:18, besting Molly Huddle’s 2015 event record by three seconds, and proudly wore the laurel wreath past the Charles Street Finish Line.

With a decisive move at the three-mile mark, Kelati widened her lead with each stride, drawing cheers from the Saturday morning crowd, and leaning into the final turns around the Boston Public Garden. “Today’s goal was to win, and I’m so happy I was able to do it, said Kelati moments after her victory. “My plan from the beginning was to push, because I’ve been doing so well in my training, and I’ve been seeing a lot of improvement.”

A resident of Flagstaff, Kelati is one of the most decorated athletes to ever attend the University of New Mexico, and came into the Boston 10K for Women with the fastest 10,000 meter time of anyone in the elite field. After a first mile of 5:05, a pack of three emerged at two miles, when Kelati was joined by training partner Sharon Lokedi of Flagstaff, and Mary Munanu. The two Kenyans stayed with Kelati for a mile, passing crowds along Cambridge’s Memorial Drive, and drawing cheers from trailing runners passing in the other direction.

At mile three, however, the Weini Kelati show began, as she surged ahead from Lokedi and Munanu, who would finish second and third respectively, in times of 31:57 and 32:35. The out-front running was no problem for Kelati, who logs plenty of solo miles in Arizona. “I just race with myself [in my training] and see how fast I can run. I know there were fast runners here today who could hang on with me, but all I was thinking was I’m just going to go and run my race.” Her plan worked to the tune of a new American record. “This is what makes me feel great – when I finish the race, so, I did it.” Kelati averaged 5:03 pace for the 6.2-mile race, and earns $9,000 for the victory.

The Boston 10K for Women was held on a Saturday morning for the first time in race history, having moved its traditional race date of the second Monday in October to accommodate the 125th Boston Marathon. More than 3,000 registered runners took to the streets and cheered for Kelati on her record-setting run. “I think it’s more fun to do the road race, there are people everywhere!” said Kelati, who has raced several times in Boston, but never experienced the thrill of a road race.

For Kelati, today’s race was also a chance at redemption from the 2021 Olympic Trials in June, where she did not finish. “Last summer, I kind of left heartbroken because I didn’t make the [US Olympic 10,000 Meter Team], and the race didn’t go as I needed. But I am so proud to be here, a citizen, and represent America at the highest level.”

For race founder Dusty Rhodes, it’s an annual tradition she was happy to see return. “We were thrilled to put together a virtual event last year for our runners, but nothing beats this,” said Rhodes, gesturing to hugging friends at the finish line. “We’re excited to be back. Road races are celebratory events that bring out the best in all of us, and today’s a perfect example of that.” 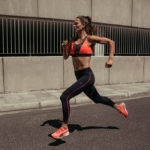 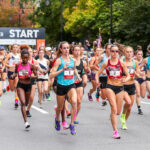 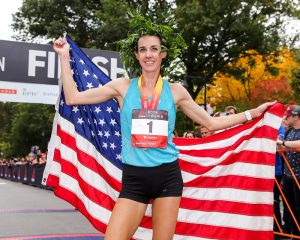 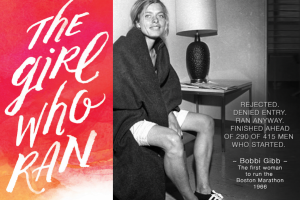 Bobbi Gibb to be Official Starter