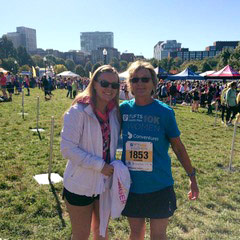 In 1977 I saw my brother out running and said to myself ‘I can do that’ and just started running. I just ran to get out and be active. I then heard about the Bonne Bell Mini Marathon and it sounded like fun, so I signed up and ran.

I continued to run because I wanted to be part of this all-women’s race for as long as it lasted. After 15 years, we were invited by Conventures to get together with other 15-year runners, so we knew we had to continue running.

Whether I’m having a bad day or just don’t feel like running, once I’m out running I feel so good and all is well. I solve all the world’s problems out on my run. 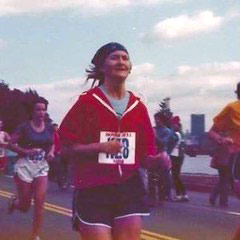 Running has given me the confidence to try other things—I have completed a biathlon and many triathlons, marathons all over the world, and mountain runs.

I now run many races with my daughter Meredith, and am proud that she will be running her 16th Reebok Boston 10K for Women.

Two years ago I was out running and tripped on an uneven sidewalk and broke my hip. While I was in the hospital, I told the nurses I had to get out of there because I had a big race coming up. When the surgeon walked into my room he said hey, I heard you are telling everyone you are running a race in 2 weeks, well, I am here to tell you that you are NOT running a race in 2 weeks.

So, I managed to find a wheelchair and showed up at the race!!

So this year I am back strong and ready to run my 43rd! 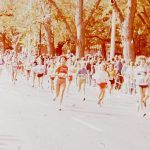