New for the 2019 Reebok Boston 10K for Women, we are pleased to introduce you to a group of fun, strong, creative, and powerful women that you should know. They are our Official Race Ambassadors!

I am a mother of four from Wellesley, MA and I started running at the age of 13. I was diagnosed with Stage III invasive breast cancer in 2009 and ran the race that year. Running made me feel strong despite the heavy duty treatments and my oncologist told me it would help me on so many different levels. I ran a race every other weekend during that year of treatment. On the fifth anniversary of my diagnosis, I was diagnosed with Stage III thyroid cancer. I found a thyroid cancer half marathon fundraiser in Acton, and ran it three weeks post-surgery, winning my age group. Running helps me get through the ultramarathon of treatments, and more importantly it reassures my kids.

In August 2015, I was diagnosed with a metastatic recurrence of my breast cancer. My kids were scared as they know people die from Stage IV cancer and there is no cure. Within minutes of learning about my now “terminal” diagnosis, they all asked if that meant that I would not be running Boston in 2016. And a few months later, in January of 2016, my thyroid cancer also came back and spread. I am now living with two Stage IV diagnoses, but am running almost everyday, hoping to inspire newly-diagnosed runners. I run to raise awareness about living with Stage IV disease and to raise funds for metastatic breast cancer, one of the least-funded areas of breast cancer. As I can no longer run fast, I run for fun, to enjoy each moment and I channel my inner superhero to get me through my treatments. For this reason, I can often be seen dressed as Wonder Woman at races!

What is your favorite race distance?

My favorite distance is 8K but I love to run all distances, 5K to marathon.

Do you have a special race-day ritual?

My race day ritual is dressing up as Wonder Woman.

If you could have dinner with anyone, dead or alive, who would it be?

I would love to meet and have dinner with Elvis Costello. I do all my treadmill runs to his videos.

Do you belong to any running groups or track clubs?

I used to race competitively for the BAA and I lead a Couch to 5K group every Friday to train women to run together. We are often up to 40 women and many have gone from never running before to completing long races. 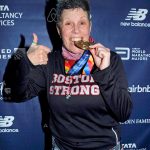 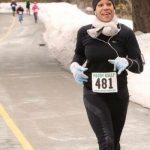